at 7:30 the alarm goes off. its time for another shveta – lesson. she explains us, that an hour only has 60 minutes, and since we are 6 people that absolutely cant use the sink to brush teeth, we wont be ready at 9 to start the snowmobile tour. of course everyone was ready, except for her. why? facebooking on her mobile.

then we headed off for our snowmobile tour. yes, snowmobiles are fun as we would find out later. but first we got covered in arctic gear, we felt like.. arctic-gear-wearers. it was warm, it looked goofy, we were happy.

the snowmobiles, really snowy. in the hands of certain indian women, they are also weapons of tree-destruction. fichtenmoped, redefined. 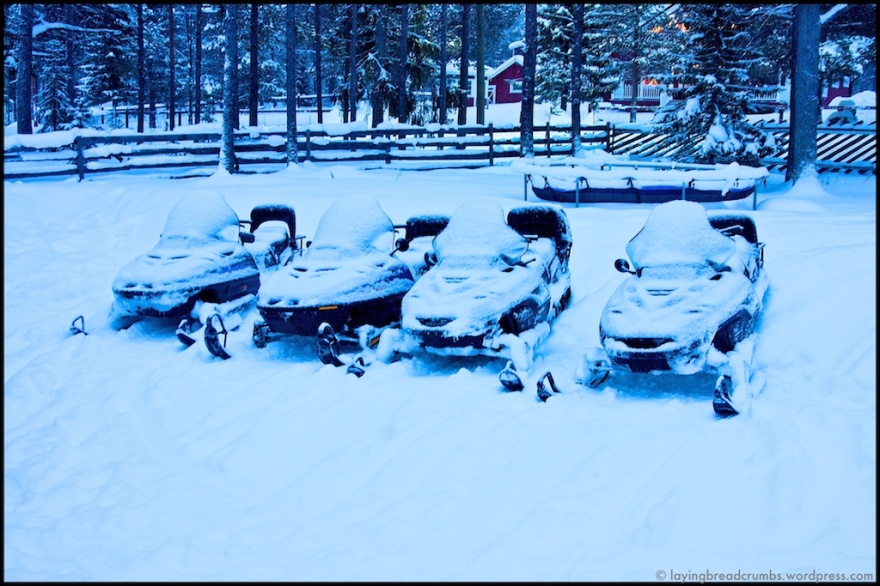 since most of you werent there, thats what the view from the drivers seat was like. not pictured: awesomeness.

first break. this is on a frozen river. as we would find out soon, it wasnt frozen everywhere… and if your usually really calm guide tells you “sorry, i missed a turn because i was too worried about the ice…” then you know whats up. 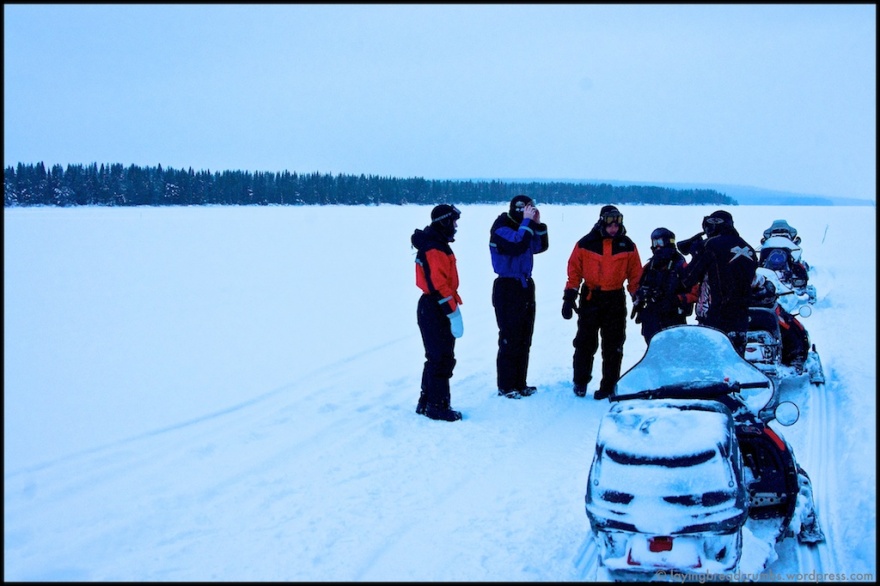 another short break. “is my backpack frozen?”

the french brigade arrives late. stuck in traffic. traffic being snow, in that case. 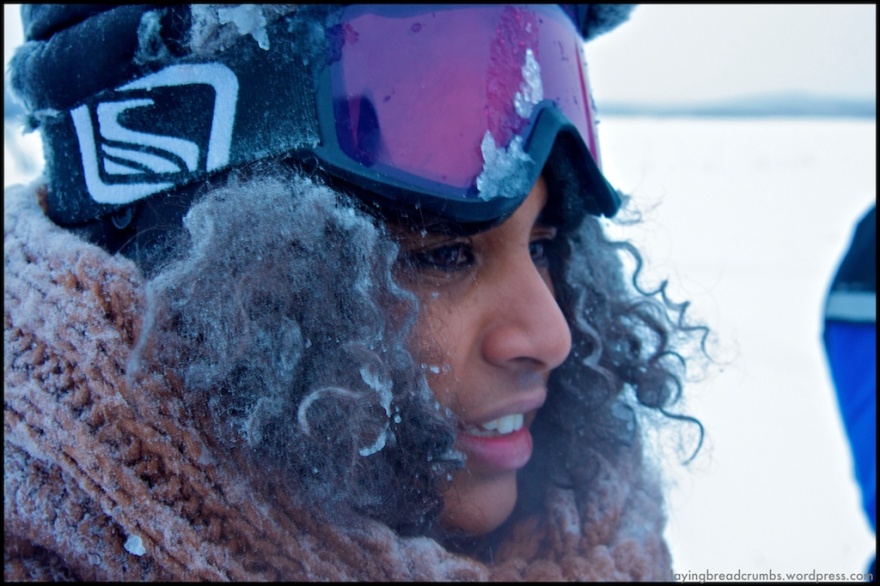 and now for the part that isnt pictured: female driving. i know, everything has been said about that, but let me add another chapter to that glorious book.

we were 2 people per snowmobile, which meant we had to switch drivers at some point to give everyone the whole experience. that also lead to the fact, that at some point, you would be sitting behind an indian woman that has a really nice technique of driving curves, not not-hitting trees and not not-falling of the snowmobile. in our case, markus was the poor guy that nearly got killed by shvetas driving skills. i cant stress it enough, snowy woods arent the streets of Delhi. somehow, the snowmobile didnt get damaged, but they were really close to flipping over once, and that all just because they ran into a tree at moderate speed… there were also 2 other incidents, 1 involving a curve and 2 people falling off their snowmobiles in comically slow pace.

for everyone that hasnt been to lappland: thats a moose. seriously, its no horse, its a moose. trust me.

thomas, our guide, prepared amazing food. reindeer-meat. not for me and shveta though, we had a veggie meal. (he said it was reindeer-balls, but i am 78% sure it wasnt) 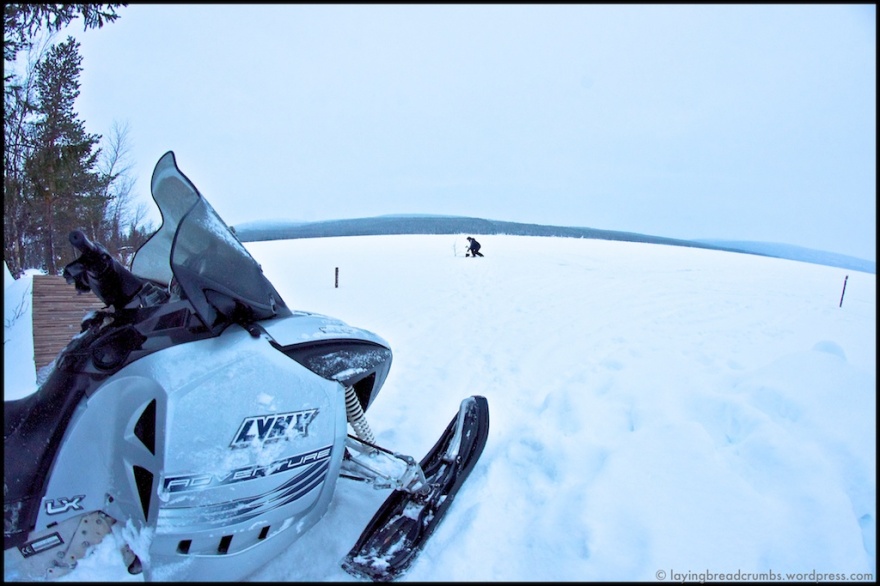 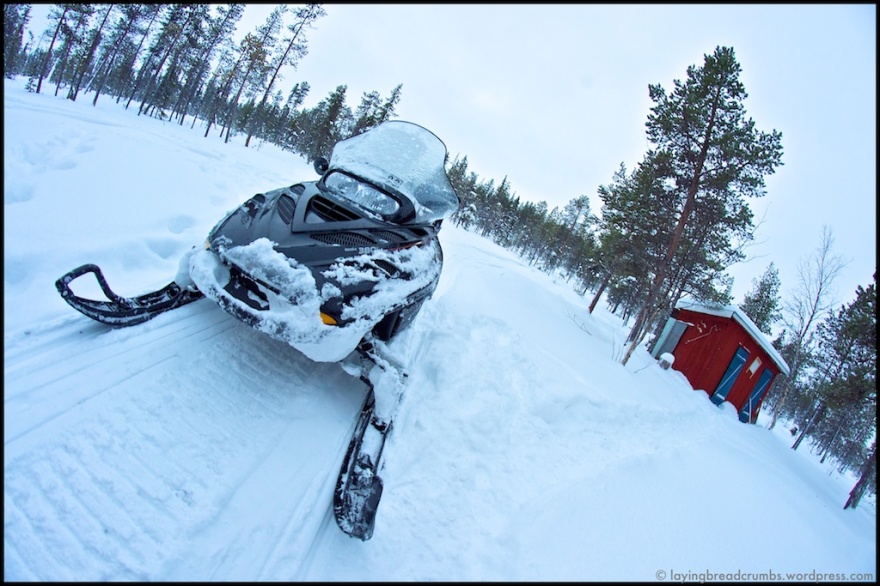 thats a red building with blue doors. sweden, you so crazy.

the veggie food is being prepared. hassan is really excited.

markus, stuffing reindeer in his mouth while sitting on reindeer-fur. reindeer-inception, oida. 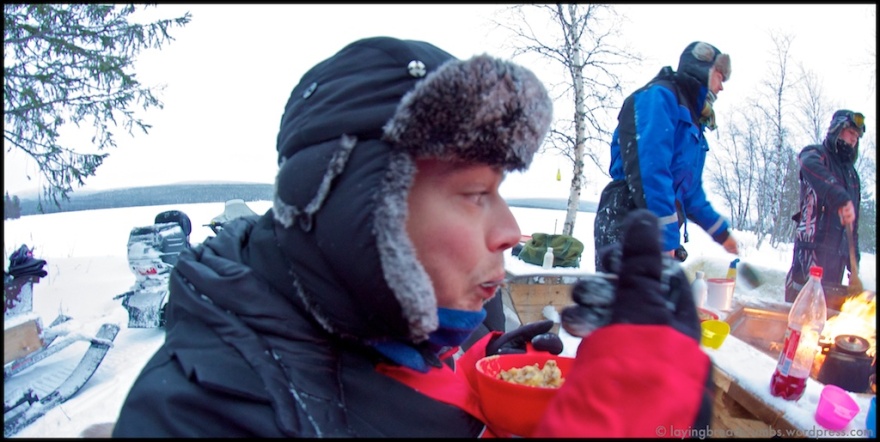 as stated before, helene loves the cold.

in conclusion: its awesome to ride a snowmobile. period.